For expert info about vintage drums, check out the Vintage Drum Guide site.

When I was a kid in the 1960's, I found it easy to get a decent drum sound. Then, starting in the mid 1970's, I found myself sitting on stage all the time, with a drum key in my hand, always tweaking something but never being really thrilled with the sound. Since this change happened gradually, it took me a while to realize that it was the drums, and not my approach, that was changing. I had always played "new" drums, and to my knowledge, there was no such thing as a "vintage" market in those days. The oldest drum sets on the planet were only 50 years old. Think about this... Remo "Pinstripe" heads were invented in 1973. At that time, it gave us the flat sound we needed for pop music then, and it made the "new" drum construction's weaknesses less apparent. Coincidence? If you're interested in my viewpoint on this history, see the article I've added, Drum Sound and Technique.

After my (Tama) drums were stolen in 1984, I discovered some 1938 Slingerland "Radio King" drums, and have played them exclusively since then. They're mechanically very simple, and always sound great. So now I've quit looking at drum catalogs, and have become a drummer who likes the sound of "vintage" drums. I don't buy them to sit on a shelf, but to play! My favorites are the drums made between 1935 and 1975.

When I can, I'm going to put together a set of 1970's Rogers drums, including a wood "Dynasonic" snare drum. The Rogers drums have a different, but very nice sound, and they were built very well. A lot of the Rogers hardware from the 1960's and 1970's is still far superior to modern hardware...very strong, without being heavy or complex. As I assemble my Rogers set, I'll post photos here. When it's "gig-ready", I'll post some audio clips here, so you can hear the difference. Since the drums will be the same size, with the same kind of heads, at the same tension, played by the same guy, (me) this should be a fair comparison for those of you with an interest in these things..

Many of the equipment choices I made as a young drummer were simply "because Buddy Rich did it". Buddy generally played very good drums, used great drum heads (Remo white-coated "Diplomat") and "tuning", and had a practical setup, so these were all good influences.

Now, over 40 years later, I still prefer this setup because it sounds great and is comfortable to me. I've experimented with electronics, extra drums and cymbals, etc., but this has always been my core setup.

When I started buying drums in the 1960's, there were only a few American drum companies... Ludwig, Slingerland, Rogers, and Gretch. My dad was a drummer who played Ludwig, but for me, it was Slingerland and Rogers. I've played the same setup since I was 14 years old. (From my point of view, this is a "Buddy Rich setup", but if you look back a little in drum history, you'll find a huge variety of other drummers who played a similar set, before Buddy.) It was easy to obtain, and standard enough so that switching to another set wasn't too difficult. So, those are the drums that I heard and played the most during my formative years. At the time, I liked the sound, but I took them for granted, replacing them often (it was much less expensive then) and virtually gave some of them away in trade.

I had just gotten the Slingerland drums in this photo that day and was loving them. I'm playing a Rogers "Dynasonic" snare drum in this photo. 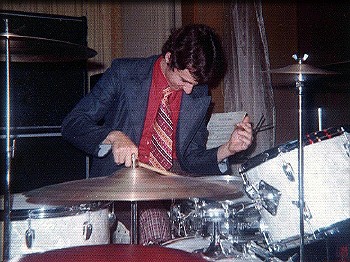 The drums at that time were usually 1 to 3 plies of nice Maple, and with minimum hardware, had a great woody, resonant sound. When Slingerland and Rogers went out of business, I found myself playing multi-ply drums made of thin birch veneer, and I never liked the sound.

The photo here is my Rogers set from my Air Force days in 1973-74. (I was a a Musical Arranger and drummer for the Air Force Band in Dayton, Ohio.) I loved those drums, but unfortunately, didn't keep them. I alternated between Slingerland and Rogers in those days.

Collectors and other fanatics might notice that while I'm playing the Dynasonic snare drum in this photo, there are two different Slingerland "TDR" drums on the floor behind me, from my Slingerland sets. And, I'm still using my Slingerland cymbal stands, because I just thought they were nice and simple. Although it's not really visible in the photos, I've always played the Rogers "Swiv-O-matic" pedal. I bought my last one on my birthday in 1972, and I'm still playing the same pedal today. That's quality! Click here for a separate article on the "Swiv-O-Matic" pedal. 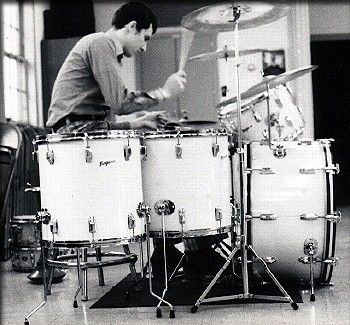 When I went back on the road in 1976, after the Air Force, I had two sets of drums... the Rogers set above, and a 1976 Slingerland set. I chose the Slingerland set, and played sets like this, up until about 1980.

These were the last days of Slingerland's high quality, in my opinion, so between 1980 and 1985, I played a variety of modern drums, including Pearl, Yamaha, Tama, etc.. It wasn't too important to me, as a rule, because I was in (Atlantic City and Las Vegas) casinos during those years, and we all played house drums anyway.

I have a nice, larger image of these drums. Click here to see it. 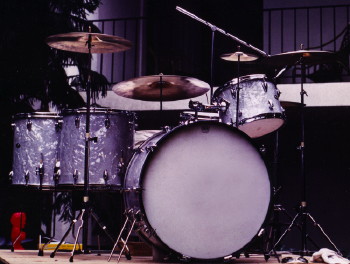 It's nice to walk into the job, sit down, and be instantly happy with the drums. The drum key mostly stays in my pocket, and I usually don't even need to mic. them, because (with Remo "Diplomat" heads, they're quite powerful. They're easy to play.

Are "vintage" drums better than anything else? Not unless you like the sound. What you like is "best" for you. 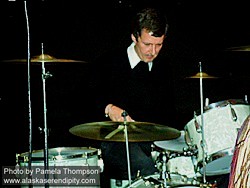 Today, with the Radio Kings

Like the Rogers drums, these Radio King drums were built right! The snare drum (from 1938!) still has the original snares on it, and sounds really special. Here's a short clip of these drums...

In 2006, I obtained the drum in the photo here, which is a 1970 Slingerland 4" X 14" "Buddy Rich model", in mint condition. I never owned one of these drums, but have always thought about having one. It sounds great, and contrasts nicely with my all-time favorite snare drum, my 5 1/2" X 14" Radio King.

This drum caught me by surprise...
Due to the depth of the snare beds, the bottom head had to be cranked up quite a bit tighter than what I'm used to. I have the top head (coated Diplomat) at a pitch of about "A", just for reference. I was worried that the tight snare head on an already-thin drum would "choke" it.

I've played the drum since 07/16/06, and I really like it. It's certainly different from the Radio King, but it's fun, because of that. It's extremely articulate. I've also had several drummer friends sit in and play it, and I like the sound that the audience hears. 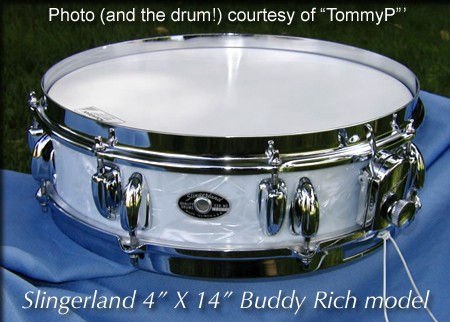 Getting a good sound from your drums

There are more details on this in my book, (See the link above), and for a general reference, check the Drum Tuning Bible too.

Buy the best equipment you can. including drum heads, cymbals, sticks, etc.. It doesn't have to be the best or the newest, but it has to be of at least medium quality, if you expect to produce a professional sound.

Decide what you want the drums to sound like to the audience. That's your "good sound" goal, which is different for everybody. Then, decide whether your drum sound will depend on microphones and special effects, or whether it will basically be the actual acoustic sound, simply amplified when needed. Let's assume that you want your drums to sound good acoustically, and not depend on the PA for tone. When it's possible, try and have another drummer play the drums while you walk around the audience area. (before the audience comes in, obviously) It can be elightening.

Today, there are an almost unlimited number of choices with drum heads, and when you get into that, (or using one kind of head on top, with another on the bottom) the discussion can go on for hours. For now, let's assume that you're using the same kind of heads, top and bottom. Check out the many helpful articles on the Remo site, as well as their product descriptions. Aquarian Drum Heads, created by one of the best drummers of all time, Roy Burns, also offers outstanding products and information. Roy was, among other things, the Staff Artist for Rogers Drums for many years, a tremendous educator, and a long-featured columnist in Modern Drummer Magazine.

The most common mistake made by new drummers is to muffle the drums too much, which causes the drums to lack projection and sound "flat". Remember, it's what the drums sound like to the audience that's most important. Like every drummer, I sometimes use microphones on the drums. But, as much as possible, I want the PA to simply amplify my acoustic sound, rather than depending on special effects for artificial resonance and/or tone.

Be aware that when you use heads that subtract frequencies from your sound, you affect the clarity to the audience. Almost every multi-layer head, thick head, hydraulic head, or otherwise-muffled head does the same thing, but to different degrees. Often rock drummers will use thick heads, for example, for durability. When you do that on a multi-tom setup, the general effect is that the drums all start to sound the same. When the drummer plays a lot of rolls on the toms, you can't tell what's high-pitched and what's low-pitched. You may like that effect, so I won't say that it's "bad". But it is different.

What you like is "the best" for you. No one can give you perfect advice on any of these things. Only your preferences and your experience can help you make the ultimate decision. And... It's likely to change over time, and in different musical situations anyway. Get a good sound, but don't become too obsessive about it. You'll be wasting time you could use for more creative thinking.

Whatever approach you use, it's important that each head be in tune with itself. Follow the recommendations of every drum and drum head manufacturer on the planet, and tension the head evenly, so that the drum has a good clean tone.

Although specific pitch typically isn't a concern with drummers, the pitch intervals between the drums usually is. On two-headed drums, the pitches of the two heads should be complimentary. Likewise, the apparent pitch (or "tone", if you like) from one drum to another should also be complimentary. You'll have to decide for yourself what "complimentary" is, but most drummers tend to choose intervals of a minor 3rd, 4th, or 5th. If you don't know what these terms mean, ask someone who knows to explain it to you.

With the toms and bass drum, all choices can be put into three categories. You can have both heads the same, or the bottom head tighter, or the top head tighter. Find out how your favorite drummers do it, and try their approach. Better yet, try each approach for yourself, until you find one that you like. You may also find that you will like different methods for different music.