Various live recordings of Mike James (most recent at top)

The trio is: Tom Bargelski on keyboard, Dirk Westfall on bass, Mike James on drums. In addition to the songs below, check out the separate list on my player, to the right here. (Clicking any of the other tunes links on this page will open them in a new window.)

Here are four live recordings of us in concert with Greta Matassa, 04-15-07: Greta is an awesome jazz singer and educator from Seattle, and it was our pleasure to work with her. Visit Greta's' web site at http://www.gretamatassa.com.

"'Round Midnight" (playing above) and "In A Sentimental Mood" (below) are live recordings of us in concert with Michael Powers, 03-18-07: My trio is keyboard, bass, and drums. So, everything else you hear on these, including guitar, is coming from Michael Powers, who plays a ("Frame Works") MIDI controller guitar. Visit Michael Powers' web site at http://www.michaelpowersmusic.com.

"In A Sentimental Mood"

It's worth noting that these concerts were all unrehearsed, because these guest artists only flew in a couple of hours before the performance. So considering that we're reading charts, watching for cues, and playing with these people for the first time, I'm pretty happy with them. Although recorded in 4-track digital, the clips posted here are "Track 1" only, which is the sound from a single (AKG "Perception 100") condenser microphone, hung from the ceiling in front of the band. (no mixing, no editing, and no effects... They're honest.)

(Note: Turn off the player above, before playing the clips below.)

Live recordings from a big band concert I produced in 2001:

In 2001, I decided to put a 17-piece jazz big band together, plus 4 vocalists, using the best musicians in Anchorage, (Credits at the bottom of this page) for a one-night-only concert. Many of them were active Air Force personnel. Thus, their availability for rehearsals was extremely limited. On a tight schedule, with 16 tunes to rehearse, we did all the preparation we could in just three 2-hour rehearsals! (So, each chart was played a maximum of 3 times, before the actual concert.) These were all "grade 5" TOUGH charts, and everybody did a GREAT job! This concert was recorded live, (from the mixing board) direct to MiniDisk, February 4th, 2001. (no post processing or editing)

* Some commercial publishers including Kendor Music, for example, use a "grading" system to describe the difficulty of their charts.
The difficulty levels are 1 through 5, with 5 being the most difficult.

The performance is not perfect by any means. If you know these charts, you'll recognize some rough spots. Typically, the band sounds better at the end of each tune, as we became more comfortable. That's what limited rehearsals get you. I'm making these files available for you to hear, regardless of the imperfections, because it was a FUN concert for us. I hope you'll enjoy it too.

These were recorded direct from the mixing board, and the mix varies somewhat, mostly due to soloists. So, I suggest listening to these either through headphones, or at least relatively-loud, through your stereo system. Crank it up!

Just click any of the links to download the MP3 file, then use your favorite player to play them.

Here are a few snapshots from the performance. 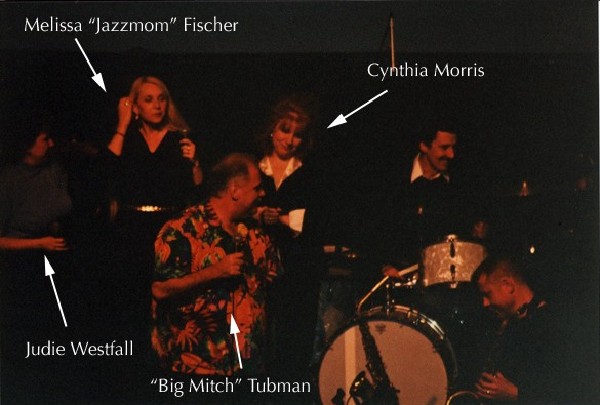 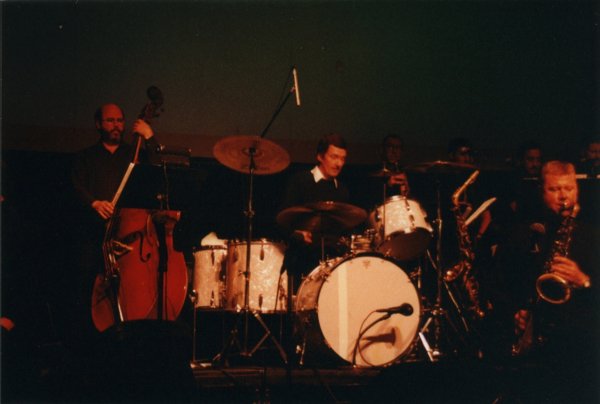 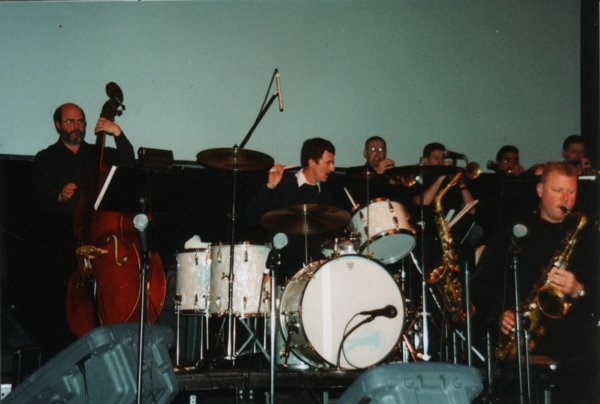 Thanks to all those involved (below) for helping me create a really fun night!

Sadly, Mitch's tunes didn't record well enough to be included here, but he did his usual outstanding job!