NOTE: This performance is free to listen to, but may not be republished elsewhere without my specific permission. All rights reserved by Fred Marcin, owner of this recording.

No money is made from this page, either by me, or the contributors. You are free to download these for your own personal use only, but not for any sort of redistribution or sale, meaning that you cannot republish these in any form, without my specific permission. That also includes using these clips for the purpose of "trades", since a "trade" implies a "sale" of sorts.

Fred sent the following text related to these photos:

These photographs were taken by me from the second row (an unbelievable vantage point to witness another RIDICULOUS performance!) in the auditorium of Bethesda Chevy Chase High in Maryland on Thursday evening January 24, 1980. This fourth photo is a composite constructed from two photos taken before the gig began. Consequently, it is a pretty nice close-up documentation of Buddy's drums of the time. Please note his "Swish Knocker" cymbal (LOUD mother'), given to him by drummer Mel Lewis, AND the infamous cheesy-sounding Synare electronic drum, which can be heard on the Ronnie Scotts live album of the same period. Also, note the tape on the underside of the ride cymbal.

I'm not sure, but I think this may be a rare opportunity for all of us BR fans to get quite such a good look at BR's kit at the time; I have not seen any other photos even remotely like this one yet. One could almost go around and sit down at those drums!

Needless to say, you have my never ending gratitude and permission to post these babies on your site!!! It's yet just another of the many offerings you'll be getting in our quest to "fill in the holes" as you so eloquently described it on the forum the other day.

These are GREAT, Fred. Thank you! (Mike James)

Fred's comments on the concert:

As usual I was excited to see Buddy and the band. Even at the young age of eighteen then, I fully understood the gravity of being able to witness firsthand an absolutely one-of-a-kind genius in performance. This concert was recorded by me using a regular mono cassette recorder sitting on my lap somewhere in the second row; you can see my vantage point by looking at the requisite photos I took, which graciously appear on Mike James’ fantastic website. (Thank you, Mike!)

The band is in excellent form. This was the first time I had the pleasure of experiencing Buddy playing with the great bass player, Wayne Pedzwater; Wayne’s feature solo is simply astounding here. And I’ve never heard another bass player play a meaner sounding intro to “Birdland” than Wayne does. Andy Fusco, as well as everyone else, solo and play just superbly. Of particular note is the solo trumpet/flugelhorn player, an older bald black man whom I’ve never seen before or since this concert. I don’t know who he is, but his solos are easily some of the best most soulful ones I’ve heard played in Buddy’s band. And I can attest that Buddy was really very happy with this player that night. Take special note of the flugelhorn solo in “Basically Blues” as it is a master class in itself. I mean I almost thought it was Dizzy playing.

Another aspect I really appreciated about this concert was the tempos. As a professional drummer I quite agree with Buddy in that tempos should breathe and develop. And I grant Buddy’s every right to subjectively determine tempos for each chart as he pleases. But the tempos are often necessarily affected by his mood and by how long the chart has been in the book. In this case I really enjoy the fact that all the tempos are really excellent here, in my humble opinion, and each chart is allowed to fully express itself. “Good News” is a case example where the tempos adhere closely to the original intent; it is slower than later renditions and therefore ultimately even more satisfying to listen to.

Please excuse the occasional overly-enthusiastic callouts by the two teenage guys right in front of me during this concert. They were trying a little too hard to sound “hip” in their admirations; even a lady sitting behind them had to finally ask them to stop at one point later on. Oh well. At least I take solace in that, had they done that in Buddy’s New York nightclub back in the day, they would have been personally escorted out of the place, maybe even by Buddy himself.

Buddy’s “West Side Story” solo? Its pure genius in action and you can view the photos I took of it while listening to it.

The production quality is what it is given the nature of a mono recording without level-metering control. Yet there is no real distortion to speak of, it’s fairly well balanced overall, and I’m entirely happy Buddy’s bass drum playing effectively punches through where it needs to. This is one of those recordings that is best listened to loudly on a good living room stereo system and not on headphones; I listened to it loud that way while I was in the kitchen cooking and could have sworn the band were playing live in the other room!

I’m gratified to be able to share yet another night of the fabulous Buddy Rich band in performance in front of a justifiably amazed and gratified full house of concert goers. I think it is clearly a testament to Buddy’s genius and indefatigable musical integrity that one can come across so many completely previously unknown and inconsequential recorded performances of him and still, ALWAYS, hear a multitude of consistently ridiculous levels of superb music being played. I mean, the known and unknown recordings keep pointing out that the man pulled this stuff off night after night thousands of times!

By the way, whoever “tensioned” Buddy’s drums that evening was completely spot on! (Remember the distinction Buddy made between tensioning and tuning, folks.) 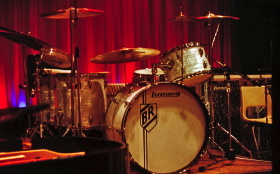 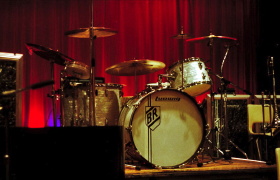 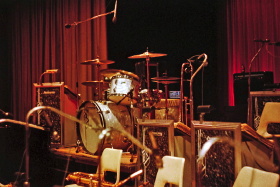 Side view, again taken prior to the gig getting underway. The excitement in the auditorium was freakin' palpable! 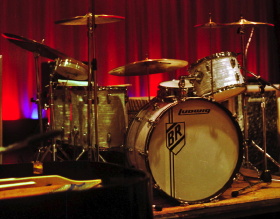 This is the composite photo (a left and right half) mentioned in Fred's text, above. Fred and I both did all we could, with a little help from PhotoShop, to clean this image up. 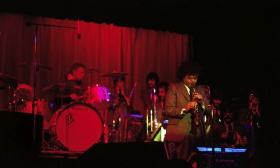 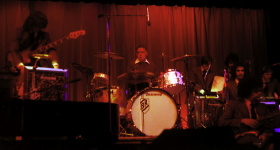 Calling up the next chart... Note the fabulous Wayne Pedzwatr and the trumpet players looking for the next chart. I love how Steve doesn't even bother and just sits there; he had his book completely memorized! This band with Wayne was absolutely KICK ASS. What a sound. Buddy must have loved every night with this line-up. That night was a definite "ON" night!

Second row, man... Jesus what a night it was! 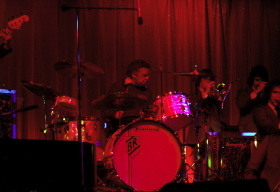 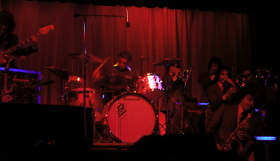 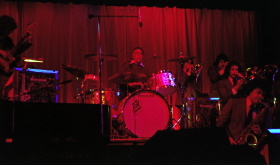 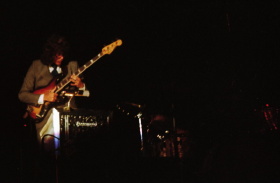 Wayne Pedzwatr at the bass! 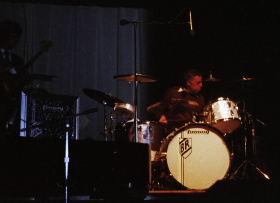 Buddy beginning to get in the zone for his solo... sticking patterns between the snare and the floor tom. 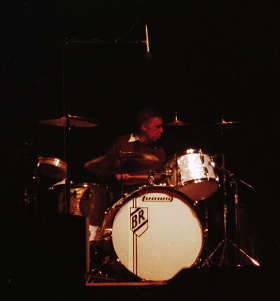 The intensity and complexity grows... 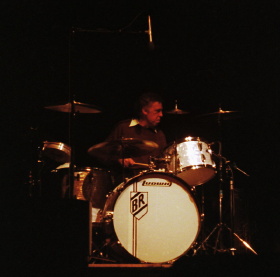 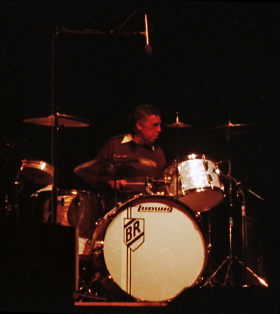 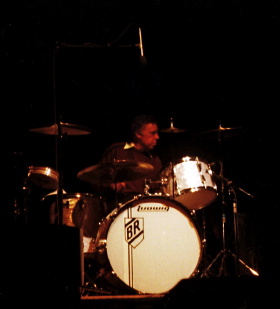 Really getting into it... remember everyone in the auditorium just watching this unbelievable crap going on in rapt awe! This solo was about 8 minutes. 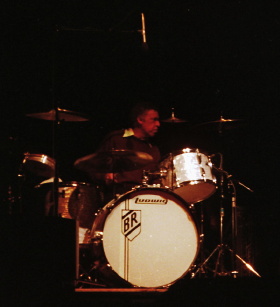 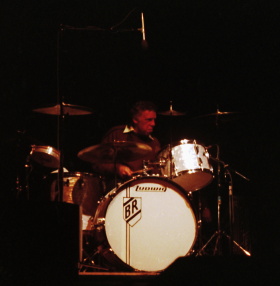 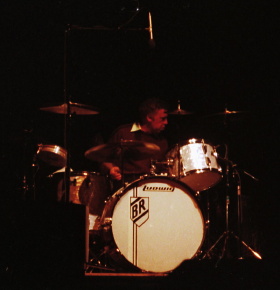 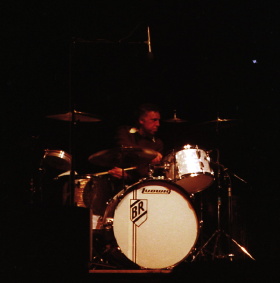 I am particularly pleased to have captured this moment of brilliant and fast cross sticking between the tom and floor tom! Note the extension Buddy achieves all the way to the floor tom and how, despite this difficult move, his middle finger still plainly rests over his drum stick! How the **** did this genius do this ****?? 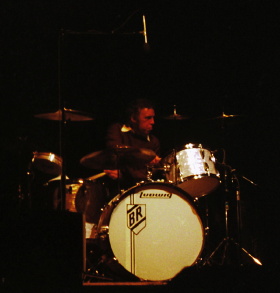 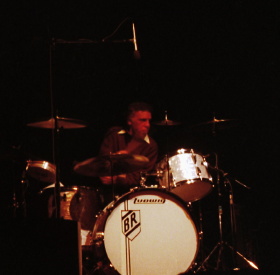 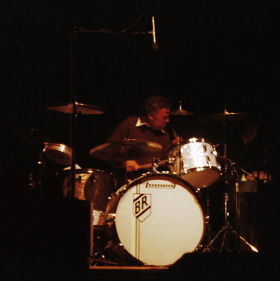 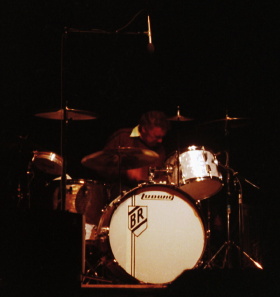 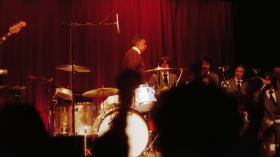 Just after the last note and Buddy begins his routine trip down to the front to speak to us, his wildly appreciative audience. At the moment this photo was taken the place was an uproarious din of sound....huge applause and hollering! Some dude's fist shaking in the air in celebration. I mean it was a ridiculous concert! 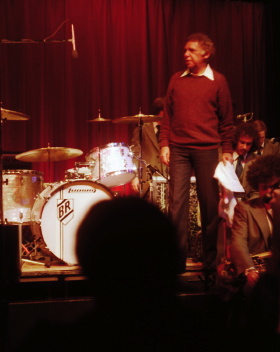 Here Buddy simply has to stand there and look over at Wayne Pedzwatr and wait for the din to finally begin to subside. And, of course, there was this unique and wonderful sense that would come over me when realizing I was this close to the master genius drummer himself! 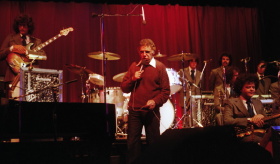 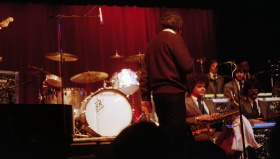 Buddy turning around to introduce the band personnel. Nice sweater he's got on during a very cold January night in Maryland. 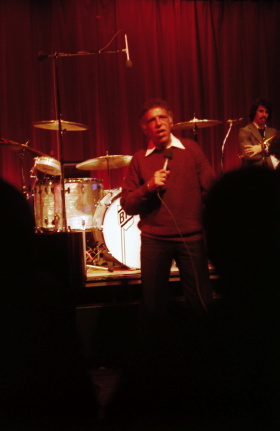 Here is the last photo of the night. Mike, do I need to tell you how hysterically funny his stand up comedy was here? I hope you enjoyed these pictures!